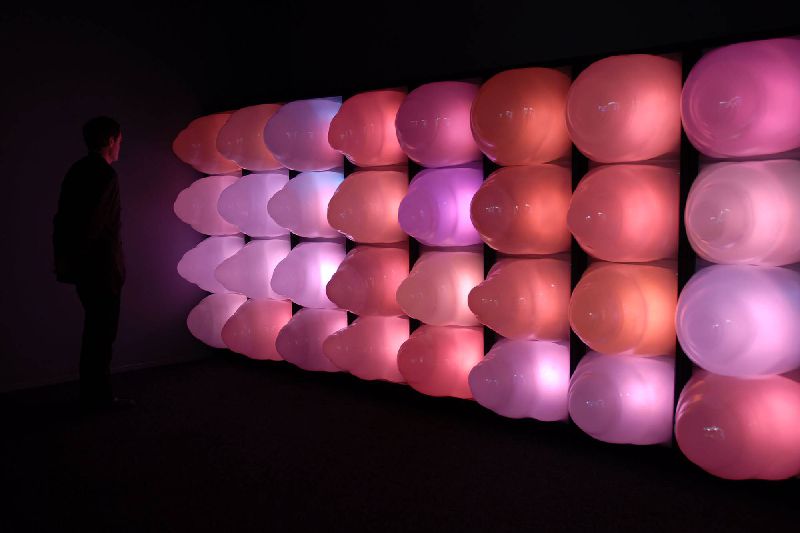 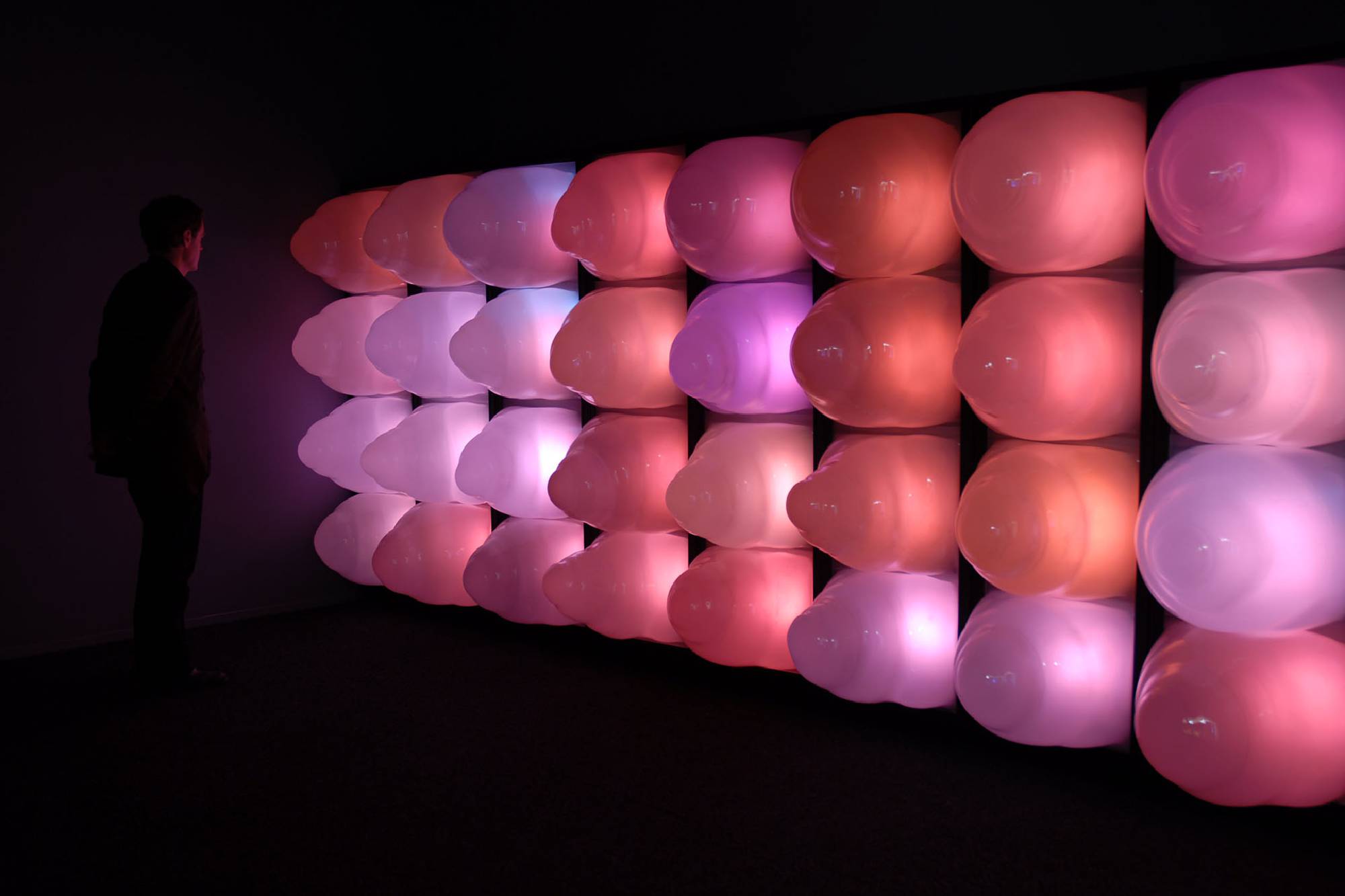 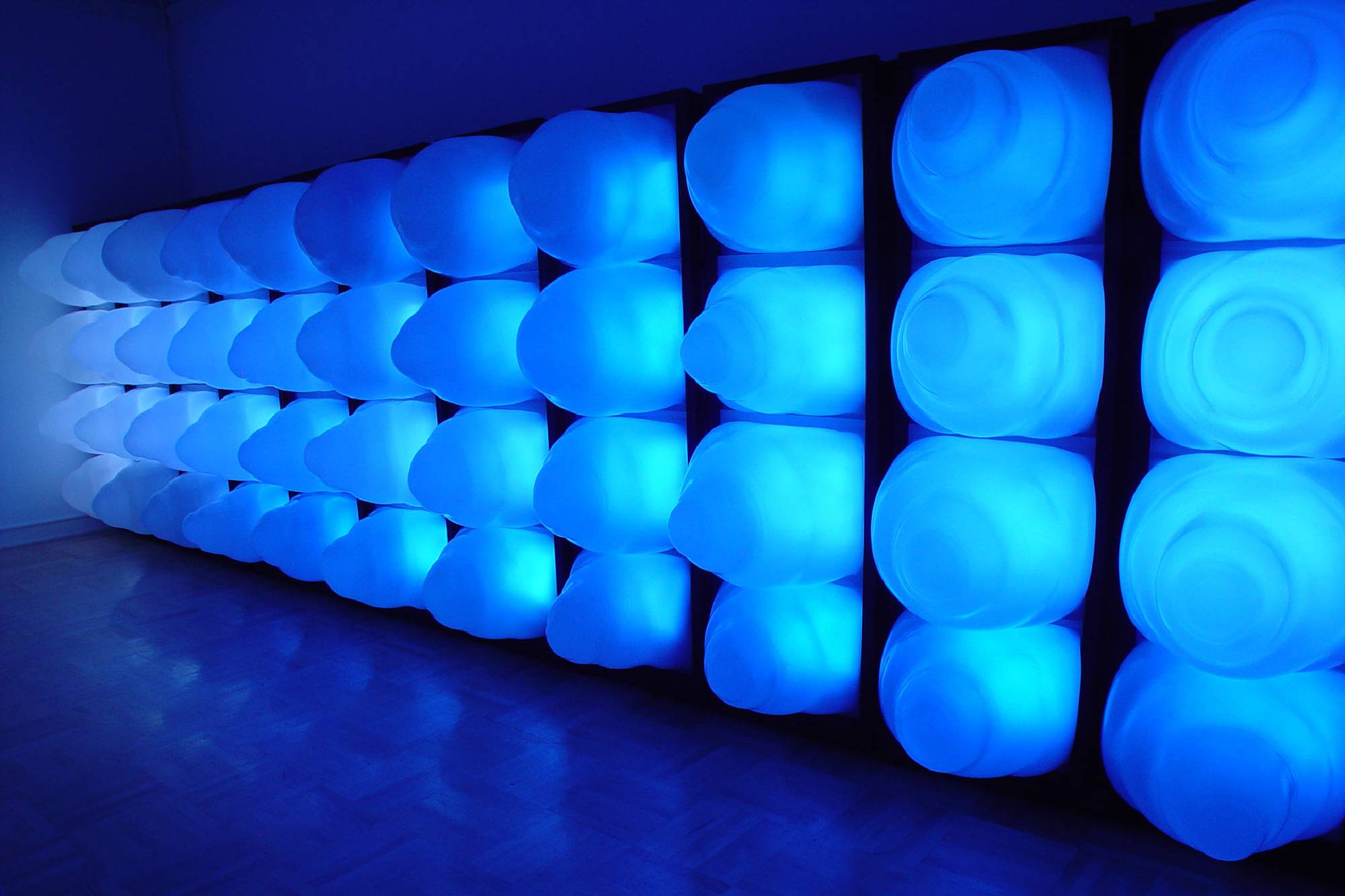 ...Apotheosis was designed for the Project’s theatre space, a large room with wooden bleachers specially built for media experiences. In the current display, 40 video monitors face the bleachers, mounted cheek-to-jowl four screens high and 10 rows across. As we watch, shimmering pastel colors sweep in successive waves across the lined-up TVs, the color shifts following a sequence meant to suggest alternating natural rhythms of growth and annihilation. To say that the shifting colors are meant to suggest the cycle of birth and death isn’t really a stretch, since Rice has covered each monitor with a bulbous plastic snout suggesting, especially when pink or orange colors are active, a variety of body parts: nipple, nose, penis. I personally imagined groping, fleshy fingers, a satisfying metaphor for Rice’s desire for the video experience to touch the viewer in some new, previously unattainable, fashion.

Apotheosis, completed in 2006, rivals Resolution for sheer visual pleasure. Housed in another darkened room, it consists of ten banks that contain four, large, cast polyethylene shapes in each. The artist contends that the form of the cathode ray also inspired these shapes, but he has taken license and rendered them more bulbous. They actually look fleshy; their large, slightly irregular, ovoid shapes suggest a kind of generic, symbolic body - or body parts. As in Resolution, the pieces are programmed to emit shifting hues filtered through CRT monitors and the surface of each plastic piece is frosted so that the light is diffused, rendering the colors slightly fuzzy as they move from cool lavender to tumescent pinks and brilliant corals. It's a brainy assemblage of plastic, computer programs and CRT monitors designed to evoke a distinctly lyrical response. That Rice's parameters are firmly set around the TV yet yield so many associations is provocative in itself. That he additionally turns the technology TV (sans content) into objects of formal beauty becomes a slightly subversive act.